i
This website uses cookies to offer you the best user experience and to permanently improve our online services. By continuing to use this website you agree to the use of cookies.
Industries / Rail trackside / Success stories / MBCR

The Worcester line previously under CSX dispatch and maintenance responsibility and used as a shared Commuter and freight line has recently been reassigned to the Massachusetts Bay Commuter Railroad company (MBCR) as a result of increasing ridership in the area, too many delayed trains combined with pressure to improve On-Time performance.The Worcester line is located in a high lightning potential area “Lightening Alley” which means any new equipment installed requires an extreme level of robustness.

The line is now carrying between 15 000 and 20 000 passengers each day on a distance of approximately 44 miles into Boston. As part of the infrastructure upgrades MBCR needed to make some updates and install telephone lines along the trackside as well as 15 interlocking points and back up for each of them for a total of 63 lines.

Two alternatives were given: the phone company who charges a high installation cost and a monthly fee for each leased line or Westermo’s extremely robust DDW-225 redundant ring Ethernet extenders which allows effective Ethernet networks to be created over long distances (up to 15 km) at data rates up to 15.3 Mbit/s. The SHDSL technology makes it possible to reuse many types of pre-existing copper cables which can lead to considerable financial savings and depending on cable characteristics, distances up to 15 km (9.3 mi) can be achieved.

Indeed MBCR found existing wires along the tracks of the Worcester line, some laid 35 years ago in 1978 and varying from 4 to 25 pairs that they could use with Westermo’s DDW-225 without having to install new cables.

They installed two DDW-225 at each location, the first one being used as primary and the second one as the redundant unit along with a triple redundancy due to the cellular modem backup. 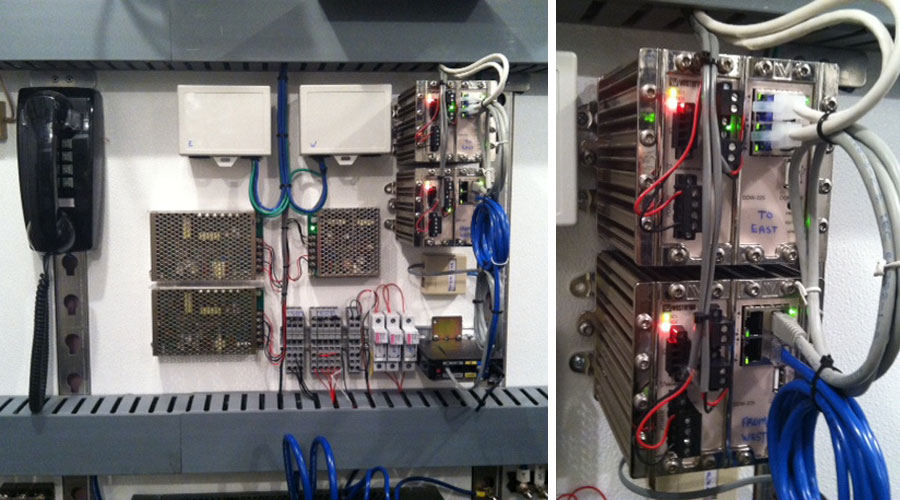 Prior to the installation of the Westermo DDW-225 Ethernet Extenders, each control point had been connected via various systems: DSL, Cellular, Satellite, Frame Relay. Each system required replacement hardware and the knowledge of how to install and configure the equipment during failures. Repairs typically involved multiple technical personnel and coordination before repairs could be implemented. With this install completed, MBCR technicians have a minimal number or repair parts to stock and a single configuration style to understand.  With the quick repair times along with the redundant configuration of the system Dispatchers are typically unaware of a system failure. MBCR dispatchers now have real time information and are expecting a significant improvement toward their goal of 100% on time arrival.

Ask me about Ethernet Extenders