i
This website uses cookies to offer you the best user experience and to permanently improve our online services. By continuing to use this website you agree to the use of cookies.
Industries / Train networks / Success stories

Regional trains in Germany and the Netherlands has been delivered by Bombardier with an on board Ethernet network built with the Westermo train backbone router. This is the world’s first example of Ethernet protocols being used for train control data management.

Up to now, Ethernet protocol has been used on board only in CCTV (Close Circuit Television), for Information and Entertainment. Most of the different systems in a train have traditionally had separate interconnection or networks. For train operation, a railway-specific network called TCN was used. Bombardier Transportation teams have developed a new system where Ethernet is manages all the train’s on board equipment. In the first projects, the old and new networks - Ethernet rings and TCN - will coexist, but Ethernet will fully replace the TCN in two or three years. The Bombardier Transportation system will be the first to integrate all the intelligent devices onboard into one Ethernet network. The first train projects without any TCN - relying solely on Ethernet networks - are already in the design phase.

For the regional trains currently delivered in Germany and the Netherlands, the Ethernet network is able to determine the composition of a train e.g. what kind of coaches constitute the train, in which order they are coupled together, and in what direction they run (to be able to open the correct set of doors, etc). The TCN is kept for train-wide communications.
“We have a project where the TCN will be kept only for local connections whereas the train-wide communication will be carried out on the ETB (Ethernet Backbone). They will start commissioning after the summer. This is the next step on the way to the full Ethernet train. The network carries all data types needed for control, security and passenger information e.g. data from surveillance cameras, passenger announcements, data to control the operation of the train and coaches (doors, propulsion, lighting....). All except signalling and Internet access will be managed through the Ethernet protocol.” Says Klas ENGLUND, TCMS Product Manager at Bombardier Transportation Sweden. 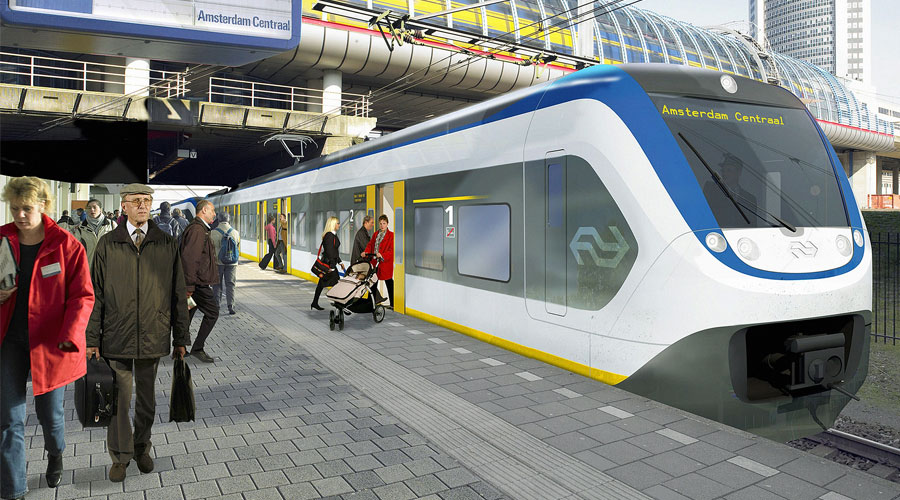 Westermo supplies different basic network components: managed ring switches, managed train switches, train repeaters and unmanaged switches. All are from the new Red Fox product line. There are an average of 2 to 4 switches per car, and 2 to 8 cars per train set. 400 switches have been delivered. Each has a switch which also serves as a repeater. The repeaters are only necessary in long train sets as Ethernet segments can only operate over a 100 m distance.

Reducing costs and improving functionalities are the two main reasons to change train networks into Ethernet networks. Hardened Ethernet products and knowledge are now common even with higher data transmission rates and bandwith, whereas the rail-specific network knowledge and equipment are very specific, leading to high costs. Furthermore, there is an increased demand for larger bandwidth, necessary to respond to improved diagnostics function requirements and to handle audio/video security functions and CCTV (Close Circuit Television).

”There were many candidates for cooperation around these products that will probably become the new train standard. The main reasons for us to go with Westermo were, firstly, that they had an interesting and promising concept for their RedFox product line which could serve as a platform for implementation of our add-on functionality. Together we saw the possibility for adaptation to our needs and the integration of our special software solutions into the products. Westermo also demonstrated an open mind about the way to cooperate, and a strong involvement in customis ation for railway needs.” Adds Mr Englund.
A new front was developed by Westermo with M12 connectors. Adjustments have also been made to meet the railway specific standards regarding EMC (Electromagnetic Compatibility) and other environmental requirements. On Bombardier’s side, engineers have developed a specific software that has been integrated into the switches.

RedFox Rail is a series of switches and routers approved for railway usage according to EN50155. RedFox Rail supports 8 or 12 10/100Base-TX M12 switch ports and up to 4 10/100Base-TX M12 router ports. All ports support auto negotiation of speed and duplex connectivity, auto crossing and auto polarity. The router ports also support a bypass function where the switch will bypass communication in case of a loss of switch power or switch malfunction. Management can easily be done from the Windows based IP configuration tool, using SSH or SNMP (v1 and v2c). RedFox Rail supports layer 2 network redundancy by the well-proven FRNT v0 protocol from Westermo for fast re-configuration of ring topology. The RSTP/STP protocol can alternatively be used in case of a complex topology. Excellent real time properties are offered through both layer 2 and 3 priority support with four priority queues. The switches also support IGMP snooping for efficient use of bandwidth and a DCHP client and relay agent. Several router protocols are supported by the RedFox Rail router versions.

”In the future Westermo products will be on all types of rail vehicles from trams to locomotives,”  concluded Mr ENGLUND

Ask me about Success stories